Today’s photos come to us courtesy King County Department of Assessment. The black & white photo (1936) and the color photo (2012) were taken during government aerial surveys. Aerial photographs are taken systematically as part of an aerial mapping project for King County and the City of Seattle, usually for tax assessment purposes.

Aerial photos provide a unique look back on our neighborhood. Empty lots, long forgotten homes and occasionally whole streets are present in older aerial shots, but are no longer visible in the present day photo. This is true for today’s comparison.

During the 1960’s Safeway purchased much of the land at the corner of 8th and 65th. Safeway previously had two small stores on 65th, one near 15th Ave NW & one near 5th Ave NW; both had closed by 1940. The new modern “Marina” style store which opened in 1967 was a huge event for the neighborhood, but not all of the local businesses where happy.

The 1936 photo shows a small building close to the corner of 8th and 65th. This building was once home to Massart Grocery, which was unable to compete with the large grocery chain and closed its doors shortly after Safeway opened.

In both photos you can see that the SW corner of 7th and 65th is vacant. Property records show this lot has always been vacant. The lot is owned by John Nick and was used as boat storage for his family’s business, “Nick’s Boats & Motors”. More about this business in a later post.

If you look closely along 8th Ave in the 1936 photo you can see a median strip running the full length of the street. Today, we only have the benefit of the median strip with trees north of 65th, to the south is now one long turn lane. 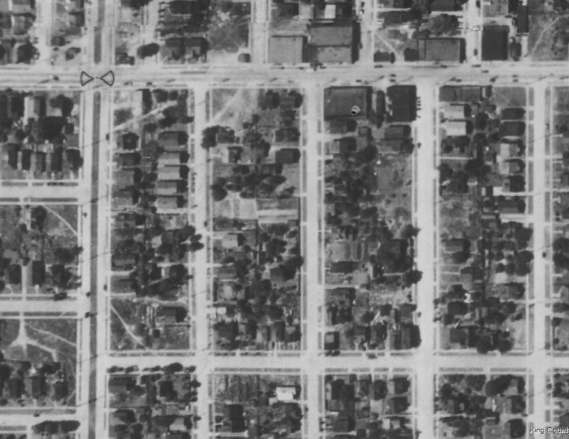 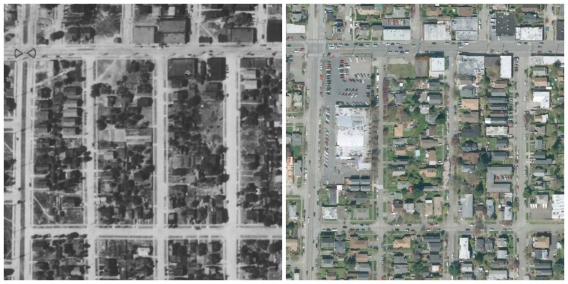