August 2014, I had the opportunity to visit with Vern Vellat, West Woodland Alumni – Class of 1941, and he shared with me how the neighborhood and NW 65th business district pulled together to survive the Great Depression (1929 – 1939).

Money was tight and at times non-existent during the Depression. Vern told me that on occasion some of his classmates would grab a handful of coal from the West Woodland Coal Company (5803 5th Ave NW) and then jump on the trolley that ran along 5th Ave NW to ensure a speedy get away. Coal was still a primary source of heat for many in the neighborhood and a pocket full was sure to warm a cold winter night.

Adult children, and their families, moved back in with their parents. Most homes had three generations of family members living together, including Vern’s family. One year Vern’s family also took in a neighbor who was in need of help.

The businesses on NW 65th came together to help the neighborhood as well. They organized themselves into a group known as the ‘West Woodland Commercial Club’ and would hold monthly meetings at 416 NW 65th Street (now part of the 418 Public House). The club organized Saturday matinees at the Woodland Theater, two movies would be shown, and during intermission the businesses would give away prizes of food, clothing and coupons for other services. Vern said that each Saturday there would be a long line of people waiting to get into the theater for this event. 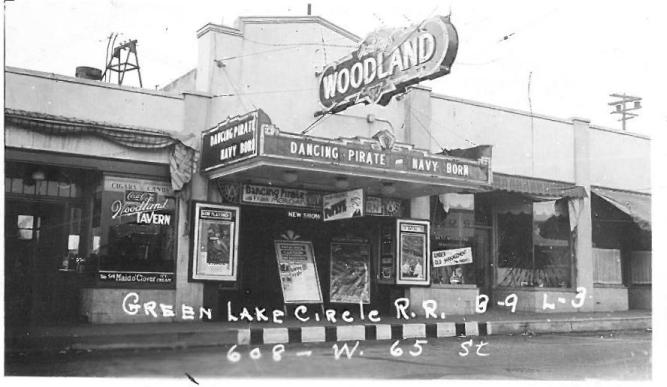 About the photos above:

The black and white photo is dated 1937, and comes to us courtesy of the Puget Sound Archives.

In the 1937 photo you can see the Woodland Theater, which was showing ‘Dancing Pirate’ and ‘Navy Born’. The Woodland Tavern (610 NW 65th St) is to the left of the theater and today this location is home to Molly Maguire’s. The Woodland Tavern’s window display includes, “Cigars, Candy, Coca-Cola and Maid O’Clover Ice Cream”. On the right side of the theater is the West Woodland Beauty Shop (606 NW 65th St) and we get a partial view of the West Woodland Café (604 NW 65th St). Today, this building is home to Advance Sign Design.