The black & white photos were taken in January 17,1957 and come to us courtesy the Seattle Municipal Archives Photograph Collection.

The City of Seattle routinely photographs public works projects, City events, City sites, facilities, and elected officials for current use and as a record of events. This photo was taken to record an auto accident at the corner of 5th Ave NW and NW 60th Street.

When putting together this photo group, I was amazed at how green this corner of the neighborhood has become. There are only a handful of trees showing in the 1957 photo. Over the last 50+ years, the City of Seattle has worked hard to “re-green” our neighborhoods. With programs like “Seattle reLeaf” (http://www.seattle.gov/trees/), households may receive free trees to plant in their yards and curb areas.

I have also included a photo of the car involved in the accident. It appears that the car hit a power pole. 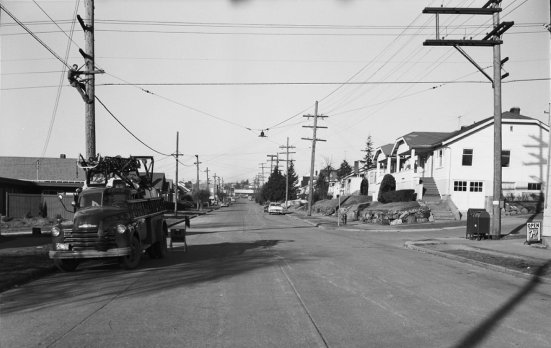