Did you know that a portion of 5th Ave NW is under the West Woodland Elementary School playfield?  It’s true!  After the original brick school was demolished in April 1990 to make way for the new building, the roadway and foundations from homes on the west side of the street were simply buried.

During the Summer of 2013 a ground source heat pump was installed under the playfield and a member of the construction crew shared with me that they needed to drill 80 holes, 300 feet deep for the project, but there had been a few delays. Several of their massive drills had failed as a result of coming into contact with old home foundations, re-bar and other construction debris that was used as fill when this area was covered.

Looks like this stretch of 5th Ave NW doesn’t want to be forgotten. 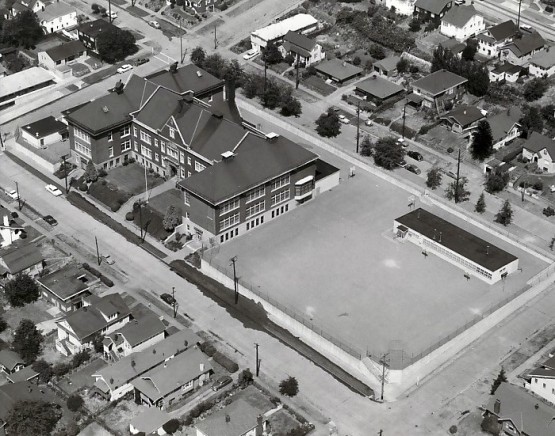 The black & white photo was taken in July 1960 and is courtesy Seattle Public Schools. Special thank you to Janet Ness, Archives & Record Management, for sharing this wonderful photo with all of us. In order to create the “now” comparison photo, I used Google Earth.

Do you remember this stretch of 5th Ave NW? Or did you live in one of the homes on the west-side of the street? Share your memories below or to westwoodlandneighbors@gmail.com.

4 thoughts on “Then & Now – Aerial of West Woodland Elementary”