Several years ago, I reached out to Seattle Public Schools asking about old school photos.  I was hoping they would have a storage room full of dusty boxes containing old class photos and pictures of events that had long been forgotten.  Maybe they would let me dig through them and scan a few to share online.  I was excited to find out that not only did they have photos, the school district also had a dedicated archives department.

Score one for historic preservation!

Through email I was introduced to Aaren Purcell, who works in the archive department scanning and cataloging these treasures. The photos are a genuine joy to look at, and occasionally the district will post to their Facebook page.  Purcell was so kind to share a few school photos, which I have posted below.

Most of the photos include some student names, but the scanner face isn’t large enough to include the whole document and some of the names have been cut off.  If you recognize a classmate, brother, sister, or neighbor, please comment below and include the photo number and a general description of where they are standing.  You can also email westwoodlandneighbors@gmail.com.

Let’s talk about the 7th Grade photo at the top of this page.

I first shared this photo on Facebook and, as a result, was contacted by the daughter of one of the children pictured, Paul Siqueland.  Turns out that Paul once lived in my home.  His parents bought this little Ballard brick after WWII.  Paul’s father served as a medical corpsman during World War I, then a chaplain with combat units in new Guinea during World War II. Read his father’s full obituary here.

Another daughter of Paul’s came by the house and shared many happy memories of her time spent playing in the yard.  She was pleasantly surprised to find out we hadn’t remodeled, and the house looked pretty much like it did during her childhood.  The pink kitchen paint has long been covered, but all the burgundy tile is still intact.  Her Grandmother would be happy.

Here are a few more school photos, courtesy Seattle Public Schools.  Do you recognize anyone pictured?  Let us know!  Comment below, or email westwoodlandneighbors@gmail.com. 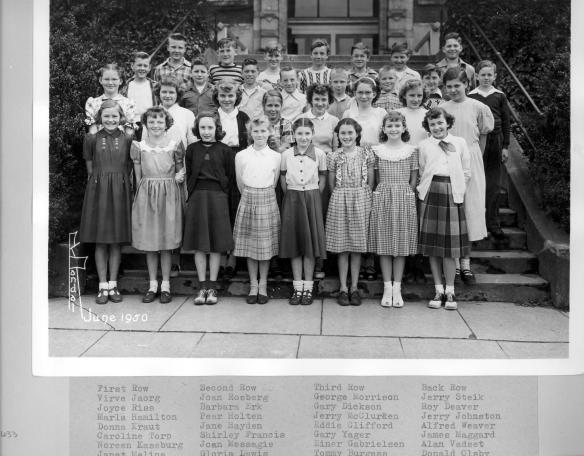