The black & white photo, courtesy Anna Jensen Kvam, was taken between 1903 & 1934 and appears in the book, Passport to Ballard, and is from the photo collection of Paul Dorpat.

The photo is undated, but we are able to assign an approximate date based on two factors. In 1903 the “Cow Ordinance” went into effect making it illegal for cows to roam freely. Then in 1934, our neighborhood became a construction zone when the city started grading and paving the dirt roads.  Since the cow is leashed and the road is dirt, we have an approximate date.

The location is approximate because there were too few data points for me to confirm the exact location. The first aerial photos of our neighborhood were taken in 1936, and by this date 8th Ave NW had been graded, widen and paved. One home in the original photo is still standing at 5816 8th Ave NW. Today the home is almost completely covered by trees and shrubs and barely visible in the photos.

The photo is of Jesse Jensen, who once lived at 330 NW 51st Street. Jesse was Anna Jensen Kvam’s father.  A 1967 Seattle Times article (see: JENSEN, K – April 9, 1967 – Seattle Times), describes Jesse as a “dairy farmer” and also as owning a “plastering business”.

If you believe you have additional information to help confirm this photos location, date or subjects, let me know. I would love to see how close I came to the exact information!

Thank you to my husband and sweet baby boy for humoring me on Sunday morning and walking up and down 8th Ave NW in order to figure out the approximate location.

Welcome to Seattle – West Woodland Neighborhood annexed on May 3, 1891

With the approval of City Ordinance 1695, the frontier district known as “West of Woodland Park” became part of the new and growing City of Seattle. It was 1891 and Washington had just become a state two years prior.  Ballard was still the ‘City of Ballard’ and would be for another 16 years, when they too would join the City of Seattle in 1907.

A Brief History of Seattle Annexations

Seattle was incorporated in 1869, eighteen years after the first white settlers arrived. From these beginnings, Seattle’s population grew to over 80,000 by 1900, tripled in the following decade, and expanded to about 550,000 people by 1960, a number that has remained relatively stable to the present.

Seattle also expanded geographically, from its original territory around Downtown and the Central Area, through a wave of annexations in the early 1900’s that included the suburban towns of Ballard, West Seattle, Columbia, South Park, and Georgetown. Finally with several annexations in the 1940’s and 1950’s that brought in Arbor Heights and areas north of 85th and 65th Streets up to the current city limits at 145th Street.  The full list of annexations is available HERE.

While Guy C. Phinney was busy building on Phinney Ridge, Rasmus Peter Jensen was making a name for himself right here in the West Woodland District. 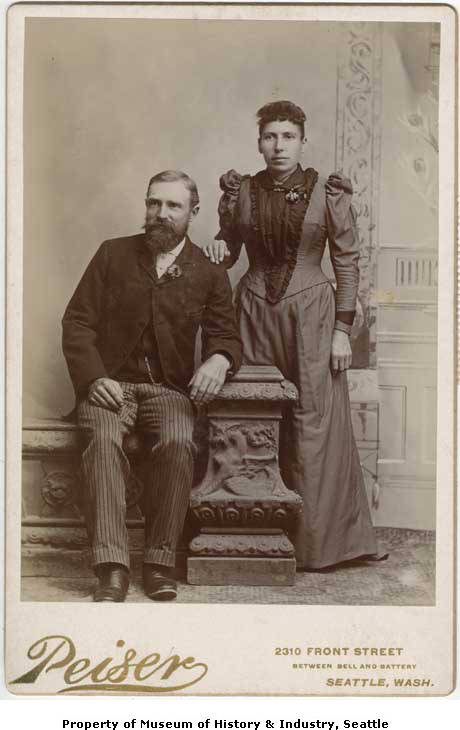 Photo of Jensen and his wife Marie, dated 1892, courtesy MOHAI

Jensen immigrated to Seattle in 1889, the year Washington became a state, and homesteaded in the West of Woodland Park District.  He built a farm house located near today’s SW corner of NW 60th and 7th Ave NW and opened a general store, Woodland Grocery, Flour & Feed, at the SE corner of NW 60th & 4th Ave NW.  Jensen was also a carpenter by trade and owned a construction business.  He built several homes in the area, including 404 NW 60th Street, which was built about 1891 making it one of the oldest homes in the neighborhood.  Jensen lived in this home until his death on January 9, 1943 at the age of 80.

Jensen married his sweetheart Marie in 1892. In their wedding photo, Jensen wears a formal coat and trousers and Marie wears a dark dress with a shaped bodice and puffed sleeves. At the time, many women still followed the custom of choosing a wedding dress that they could also wear at other times.

The original West of Woodland Park District included the frontier territory north of the old Ross neighborhood (West Fremont/ North Queen Anne), the west-side of Phinney Ridge and, to the west, was bordered by the City of Ballard at today’s 8th Ave NW, formerly Division Avenue.

Until 1907, Division Avenue (8th Ave NW) was the boundary between Ballard and Seattle. As a result, today’s West Woodland neighborhood is part old Seattle and part old Ballard.

McKee’s Correct Road Map of Seattle (1894), courtesy The Seattle Public Library, shows the few roads that were available in the West of Woodland Park District at that time. The city limits (dashed line) include NW 85th Street to the north and Division Avenue (today’s 8th Ave NW) to the west. Access the map HERE.

Interesting sidebar about Greenwood Cemetery, seen at the top of the map. From Diana Wurn (special to the Seattle Times, October 28, 2007), “The commercial center of the (Greenwood) neighborhood is at Greenwood Avenue North and North 85th Street. But more than a century ago, it was a cemetery, known as Woodland Cemetery… The bodies were moved to Crown Hill Cemetery in 1907.”

This aerial photo above of the West Woodland Neighborhood is dated April 25, 1947 and comes to us courtesy Ron Edge.  16MB file available here.