Welcome to Seattle – West Woodland Neighborhood annexed on May 3, 1891

With the approval of City Ordinance 1695, the frontier district known as “West of Woodland Park” became part of the new and growing City of Seattle. It was 1891 and Washington had just become a state two years prior.  Ballard was still the ‘City of Ballard’ and would be for another 16 years, when they too would join the City of Seattle in 1907. 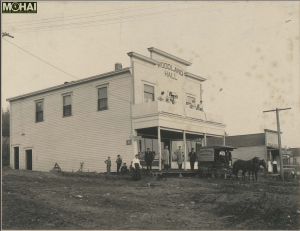 A Brief History of Seattle Annexations

Seattle was incorporated in 1869, eighteen years after the first white settlers arrived. From these beginnings, Seattle’s population grew to over 80,000 by 1900, tripled in the following decade, and expanded to about 550,000 people by 1960, a number that has remained relatively stable to the present.

Seattle also expanded geographically, from its original territory around Downtown and the Central Area, through a wave of annexations in the early 1900’s that included the suburban towns of Ballard, West Seattle, Columbia, South Park, and Georgetown. Finally with several annexations in the 1940’s and 1950’s that brought in Arbor Heights and areas north of 85th and 65th Streets up to the current city limits at 145th Street.  The full list of annexations is available HERE.

While Guy C. Phinney was busy building on Phinney Ridge, Rasmus Peter Jensen was making a name for himself right here in the West Woodland District.

Photo of Jensen and his wife Marie, dated 1892, courtesy MOHAI

Jensen immigrated to Seattle in 1889, the year Washington became a state, and homesteaded in the West of Woodland Park District.  He built a farm house located near today’s SW corner of NW 60th and 7th Ave NW and opened a general store, Woodland Grocery, Flour & Feed, at the SE corner of NW 60th & 4th Ave NW.  Jensen was also a carpenter by trade and owned a construction business.  He built several homes in the area, including 404 NW 60th Street, which was built about 1891 making it one of the oldest homes in the neighborhood.  Jensen lived in this home until his death on January 9, 1943 at the age of 80.

Jensen married his sweetheart Marie in 1892. In their wedding photo, Jensen wears a formal coat and trousers and Marie wears a dark dress with a shaped bodice and puffed sleeves. At the time, many women still followed the custom of choosing a wedding dress that they could also wear at other times.

The original West of Woodland Park District included the frontier territory north of the old Ross neighborhood (West Fremont/ North Queen Anne), the west-side of Phinney Ridge and, to the west, was bordered by the City of Ballard at today’s 8th Ave NW, formerly Division Avenue.

Until 1907, Division Avenue (8th Ave NW) was the boundary between Ballard and Seattle. As a result, today’s West Woodland neighborhood is part old Seattle and part old Ballard.

McKee’s Correct Road Map of Seattle (1894), courtesy The Seattle Public Library, shows the few roads that were available in the West of Woodland Park District at that time. The city limits (dashed line) include NW 85th Street to the north and Division Avenue (today’s 8th Ave NW) to the west. Access the map HERE.

Interesting sidebar about Greenwood Cemetery, seen at the top of the map. From Diana Wurn (special to the Seattle Times, October 28, 2007), “The commercial center of the (Greenwood) neighborhood is at Greenwood Avenue North and North 85th Street. But more than a century ago, it was a cemetery, known as Woodland Cemetery… The bodies were moved to Crown Hill Cemetery in 1907.” 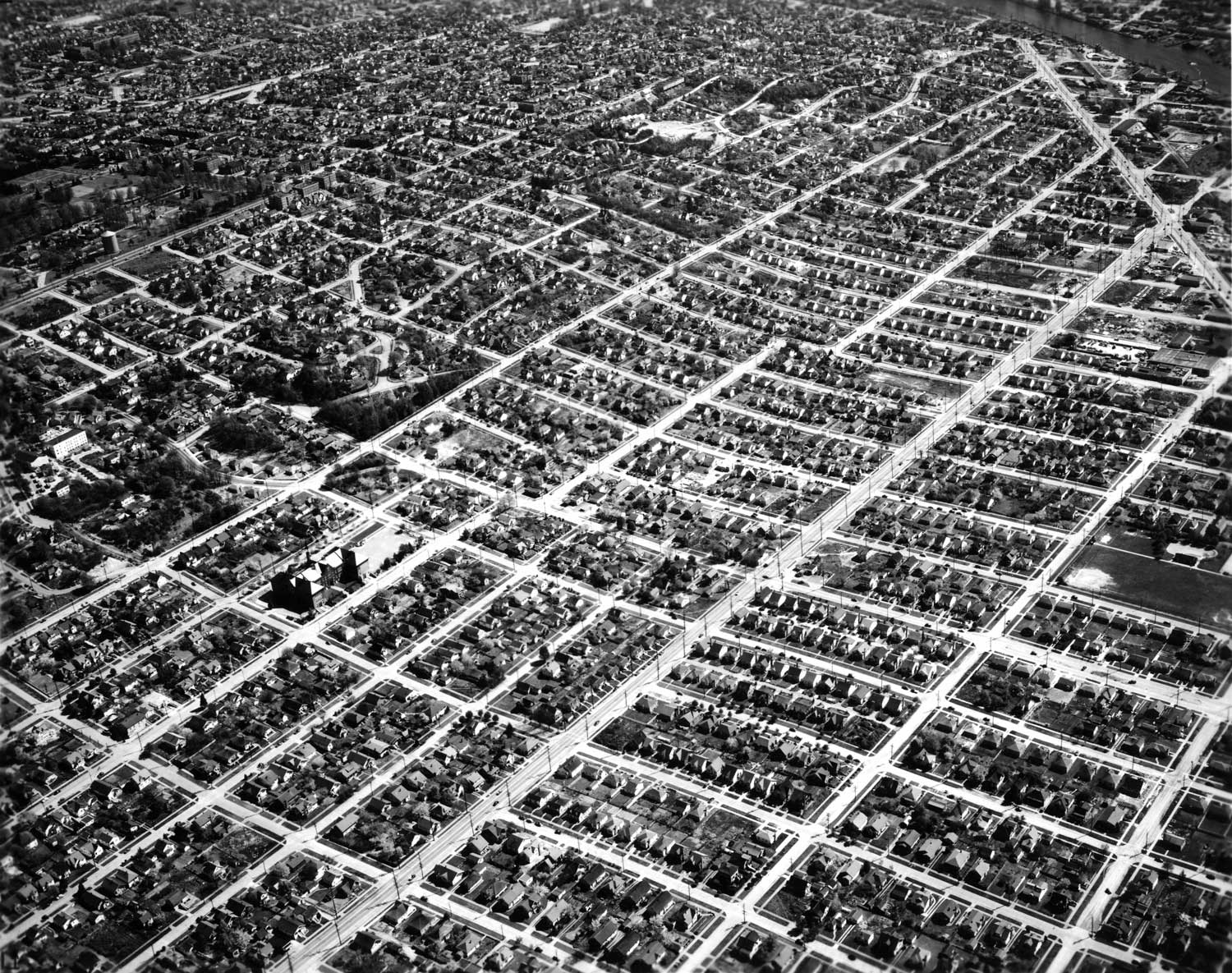 This aerial photo above of the West Woodland Neighborhood is dated April 25, 1947 and comes to us courtesy Ron Edge.  16MB file available here.

The history of Gilman Playground, or Gilman Park as it is commonly referred to, takes us back to 1927 when the Gilman Park Community Club led a petition drive to acquire property for a neighborhood playground.  Through years of hard work and community persistence the neighborhood celebrated the opening of a beautiful new park in 1932.

The park is 3.9 acres and when first opened was considered an oasis of fun for the neighborhood, and included a play field, tennis courts, a wading pool, children’s play area, and a shelter house.  A history side note… during the planning stage, the park was called “West Woodland Playground”, but changed at the request of the Gilman Park Community Club.  (see: http://clerk.seattle.gov/~F_archives/sherwood/GilmanPG.pdf ) 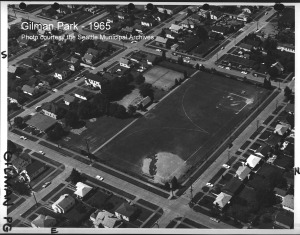 This shelter house was designed in a simplified Tudor Revival style, and was one of eight similar buildings constructed in Seattle parks in the late 1920s and early 1930s. These buildings housed large rooms for organized recreation activities and public restroom facilities. Office space for recreation instructors was also provided.

Construction of these shelter houses followed a policy to build only structures that would be pleasing in design and permanent in nature. The Gilman Park Shelter House, renovated in 1973, is significant for its design and for its association with the development of Ballard and Gilman Playfield.  As a result, this building has been designated as a historic building by the City of Seattle.

If you grew up in the NW corner of Seattle, you probably spent many lazy Saturday afternoons at Gilman Park, playing on the swings, in the wading pool, or participating in a baseball game.  Two Ballard High School graduates, who practiced their swing at the park as children, found themselves in the Majors as adults.  Southpaw Earl Johnson made his Major League debut with the Boston Red Sox in 1940 and his brother Chet Johnson played for the Tacoma Tigers before joining the Majors in 1946.

One Gilman Park adventure made the front page of the Seattle Times in January 1953.  Jimmy Wright was enjoying a snow covered day at the park when he decided to climb to the top of the shelter house.  Once on top, he showed his friends that he could indeed fit in the chimney opening…. and swoosh!  Just like Santa Clause, Jimmy went right down the shelter house chimney.   Unfortunately for Jimmy, the shelter house was locked from the outside and the only one with a key was park superintendent Ben Evans.  After finally being released, he ran to his step-father, soot faced tears streaming down his cheeks, and proclaimed, “Never again!”  One trip down the chimney was enough for Jimmy.

Finally, in 1973 the park department developed the first Adventure Playground in Seattle at Gilman Park.  Inside the see-through fencing of the playground, children 5 – 13 could build whatever they desired using the available donated supplies of wood, hammers, nails, saws, etc.  As long as they didn’t hit each other with the supplies or intentionally get in each other’s way, the supervisor stayed out of the mix.  The Adventure Playground required continuous staffing and supervision while open and this may have contributed to the playgrounds demise.

New Memories in the Making

Today when you visit Gilman Park, you are likely to see a T-ball game and little legs running the same bases that the Johnson brothers once ran.   Which one of those little league stars will one day be the next big name in baseball?  Only time will tell.  If you look up at the shelter house the chimney is still there, but the 1973 renovation ensured there will not be another Jimmy sliding down.   And if you are looking for adventure, there is still plenty available at Gilman Park.  With a large children’s play area, well maintained tennis courts and gigantic grassy green fields, it will continue to be a favorite lazy Saturday destination for years to come.

While Guy C. Phinney was busy building on Phinney Ridge, Rasmus Peter Jensen was making a name for himself right here in the West Woodland neighborhood.

Rasmus Peter Jensen, also known as Robert later in life, was born on June 14, 1862 in Skjod, Viborg, Denmark.  At the time of his birth his father, Jens, was 38 and his mother, Sidsel, was 39. Jensen immigrated to Seattle in 1889, the year Washington became a state, and homesteaded in the West of Woodland Park district, today’s West Woodland neighborhood. His original farm house was built in 1889 near the corner of 7th Ave NW and NW 60th Street.  The picture below of the Jensen Homestead was taken in 1891 and is courtesy MOHAI.

Jensen was a carpenter by trade and owned a construction business and a general store, Woodland Grocery, Flour & Feed, which was located on the corner of NW 60th & 4th Ave (photo at bottom of page). The photo of Jensen and his crew, below, was taken sometime between 1900 and 1910.  Jensen (far right) takes a lunch break with his construction crew at a house they are building. The men have carried their food to the site in lunchboxes. Photo courtesy of the Seattle MOHAI. 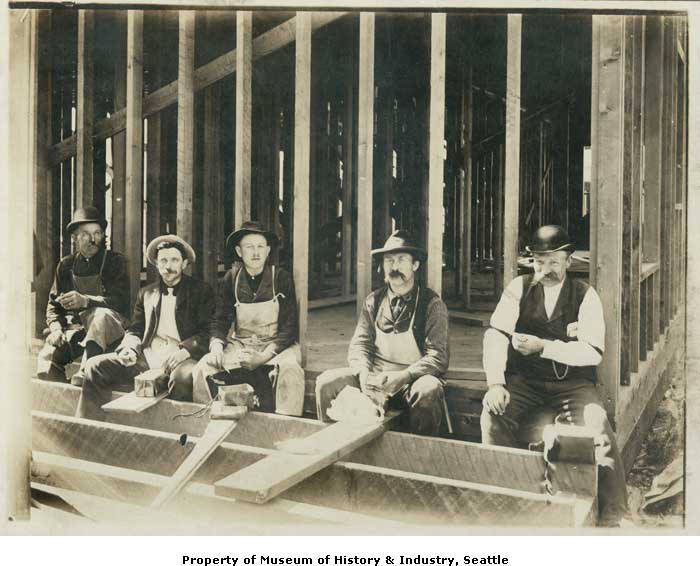 Jensen married his sweetheart Marie E.D. Hansen in 1892. They had two children during their marriage – Anna & Nathalia.  In their wedding photo below, Jensen wears a formal coat and trousers and Marie wears a dark dress with a shaped bodice and puffed sleeves. At the time, many women still followed the older custom of choosing a wedding dress that they could also wear at other times. 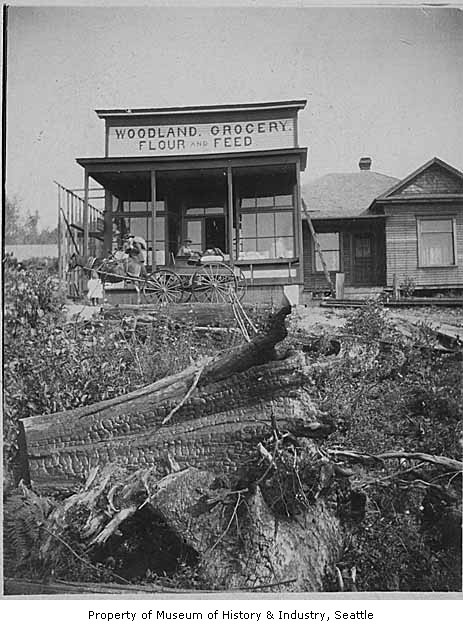 For those of you who live to the south of NW 60th & 7th Ave NW, while working in your yards be on the lookout for rusted horse shoes, broken spades or other farm tools. The homes in the area are built on the old Jensen homestead. You all may have a piece of Seattle history right under your feet.

If you have old photos of the neighborhood, please share them with your West Woodland Neighbors by posting on this site, or emailing a JPEG copy to westwoodlandneighbors@gmail.com.

Seattlites love their neighborhoods and for good reason. Seattle is a collection of neighborhoods that have been annexed into the greater city limits over the last 100+ years.  The city expanded geographically, from its original territory around Downtown and the Central Area, through a wave of annexations in the early 1900s, and then several annexations in the 1940’s and 1950’s that brought areas north of 85th and 65th Streets up to the current city limits at 145th Street.  The full list of annexations is available here.

When explaining to people where I live, I first start by saying, “The west side of Phinney” or “The east side of Ballard”.  The neighborhood of West Woodland has been claimed by other neighborhoods since Rasmus Peter Jensen first staked his claim in the late 1800’s. The former Ross Neighborhood in what is now Fremont has a similar experience, often referred to as “FreeLard” a combination of Fremont and Ballard.

The Ross Neighborhood – far left – is documented on this 1909 City of Seattle map.

I started my hunt to determine the proper neighborhood name by reaching out to the local historical societies, including Ballard’s. The City of Ballard’s eastern boundary, prior to annexation in 1907, was Division Ave – today 8th Ave NW.

Next time someone asks me, “Where do you live?”, I will tell them, “West Woodland!” and then share the story of one of Seattle’s historic neighborhoods.